As a result of the popularity of the South Korean Netflix series Squid Game, the developers of a cryptocurrency named after the Squid Game token made off with nearly $7 million. According to its website, which has now been deleted, the coin marketed itself as a “play-to-earn cryptocurrency,” which encouraged investors to risk their hard-earned money into a currency which they actually could not sell. Many investors put in lots of money, in which one of them would exit as the winner of the contest, starting with 456 squid coins (roughly $6.3k) to play in the first game and up to $210,000 to play in the final round.

The term used to describe such a scam is known as a “rug pull,” which happens when the promoter of a digital token draws in buyers, abruptly halts trading activity, and makes off with the money raised from sales by using a backdoor to remove liquidity and making away with massive profits. However, at some point, we must realize that the victims also hold some responsibility for falling for this cryptocurrency scam. The signs were all there, and this article shall enumerate the creators’ ill intentions.

The image above is the white paper of the website which platformed the Squid Game token. A white paper is a document released by a crypto project that gives investors technical information about the coin’s functionality. Upon even a cursory look at their white paper, many red flags arise. One can see numerous grammatical errors and spelling mistakes, drawing into question the credibility of this website and the members who marketed this product.

Within a week of its release, the coin’s price skyrocketed to nearly $3,000, catalyzed by prominent media outlets reporting on the currency, as well as the global popularity of the TV show. However, as quickly as its meteoric rise, Squid Game Token collapsed in one big red candle shortly after, indicative of a rug pull. Now, this coin is worth less than half a cent. 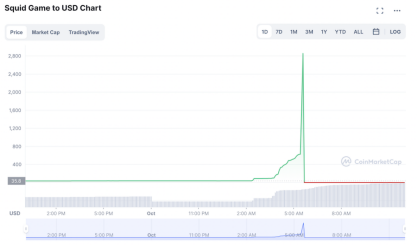 Another red flag can be seen from looking at their Twitter page. Their pinned tweet is essentially begging for a mention of their currency from billionaire Elon Musk, who has notably used his internet presence in the past to boost another cryptocurrency known as DogeCoin. This is the epitome of dodgy tactics. Such signs of desperation indicate sinister intentions, and a short-term exit after accruing funds from gullible investors confirmed these suspicions. 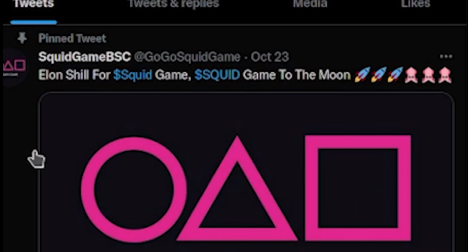 Finally, if that enough didn’t arouse suspicion from potential investors, their “Staff Members” page definitely should have discouraged any financial investment.

All of these pictures appear to be of ordinary people. But after doing some further searching for these images online, we cannot find any LinkedIn profiles or any method of ensuring the validity of their support of the coin. This leads us to speculate that they used an AI face generator to cover their tracks (an example of which is https://thispersondoesnotexist.com). This cryptocurrency scam should serve as a lesson to students at Vanderbilt eager to make a quick buck to pay off existing debt, student loans, or other reasons. Unfortunately, there is no silver bullet to earning vast amounts of money without hard work and dedication to one’s craft — whether by investing, working a job, or any other profession. Also, it is quintessential to be careful when perusing the internet, as things that seem too good to be true often are.